The first human settlements on the Venice Lagoon islands date back to the 5th and 6th centuries. Inhabitants from the mainland came to this semi-swamp area to escape the barbaric invasions that followed the fall of the Roman Empire. The early Venetians packed what personal belongings they could carry and hid the rest to escape the violence (Madden, 2012).  The populations coming from mainland Venice settled in the lagoon, fighting as hard as they could to survive: little by little this group of pieces of land surrounded by water took on the resemblance of a real town, a town that was so unique and special that it would become the only one of its kind in the world. According to an old Italian tale, King Pepin stopped to talk to an elderly woman while he was invading the islands of Venice and the birth of the city is as told: "When the king asked where the people of Venice had gone, the woman stretched out her arm, pointing to the center of the lagoon, to the islands of Rivoalto across the waves. There she said, the Venetians were hiding, fearful of the greatness of Pepin. To save themselves they had left behind their capital- and her- and she advised Pepin not to let them escape his might. The Franks, she insisted, should build a wooden bridge to span the short distance to the central islands, where they could trap the Venetians in their own refuge. Pepin eagerly took the woman's advice, completing the light bridge in a short time. Yet as the Frankish cavalry rode across it, their horses were dazzled by the sunlight on the dancing waves and frightened by the rocking planks of the bridge. One after another the horses reared and leaped into the water, leading to such chaos among the rest of the army that the bridge itself began to collapse. Like Pharaoh's army, the might of the Franks was vanquished by God and the sea. The clever woman, who watched the mayhem from the shores of the old capital, chuckled softly to herself as she looked across the water to the new capital of the Venetian people (Madden, 2012)."

Venice caught the eye of the Byzantine Empire as they gained citizens and was then annexed into the Empire. The Venetians still considered themselves as Romans. In 697 a "general counsel" met to create a government for the marshland. They decided to call Venice a republic and made parliament. They also elected a sole leader. The first Doge, Paolo Lucio Anafesto, was elected in 697. A doge was similar to an American governor; they were elected rather than given divine power to rule as many neighboring empires' governments worked at the time (Madden 31). The Venetians valued having freedom and being self-made through their work as opposed to being handed their status and money. After the government was set-up, the Venetians began to make two political parties: the aristocratic and democratic (Davis, 1973). The aristocratic party desired to be like other empires who passed leadership down from generation to generation; on the other hand the democratic party wanted freedom and more church values and control present in their government (Davis, 1973). The parties did not get along and were constantly anxious of whether one would attack the other after the murder of a Frankish patriach (Davis, 1973).

During the French Revolution from 1789-1799, Napoleon Bonaparte rose to power in France and conquered Italy, just as France had done in the late 1700’s (Staff, 2009).  With the French takeover ideas of nationalism and freedom came as well, making Italy desire to be unified and it’s own country (Issues Relevant to U.S. Foreign Diplomacy: Unification of Italian States).  After Napoleon fell, most of the states of Italy were given back to Italy, although some were still under outside rule.  Secret societies that worked towards Italian nationalism started to take root in the mid-1800’s and by 1848 revolutions started to occur.  When the Franco-Austrian war took place in 1859, Italians took this opportunity to create the Kingdom of Italy, which consisted of northern Italy (Issues Relevant to U.S. Foreign Diplomacy: Unification of Italian States).  In 1861, all the Italian states were unified under one monarch.  After the assassination of the king, a Socialist government took over, with a Prime minister and Parliament, as well as quite of bit of influence from the Roman Catholic Church, and the existence of a King still.  The Italians tried to stay out of World War I, but eventually joined and the monetary and life costs were so great that many were upset with the government, allowing Benito Mussolini and his fascist regime to take power.  In 1922, after his famous March on Rome, Mussolini was appointed Prime Minister of Italy, where he slowly infiltrated Parliament with fascist supporters, allowing him to eventually get rid of Parliament and the King’s power, until power was solely his.  He created a secret police to add terror to the lives of Italians to prevent any uprisings.  After WWII though, Mussolini had lost so much support, Italy had been taken by the Allied powers and was so economically devastated that Mussolini was removed from power and killed (Trueman, 2000-2015).  After much political instability and working towards creating a new government as well as recovering from WWII, the Italian Republic, which consists of the Chamber of Deputies and Senate, both elected houses, as well as a President and Prime Minister was established in 1974, with the Constitution being created in 1955.  This government lasted through the Cold War, although the Communist party was a large group trying to gain power against the Christian Democrats, and political instability remained with secret voting taking place in parliament (Powell, 2015).  After working to modernize, relieve economic strain and social changes, the current government of Italy is a Republic (Italy, 2013). 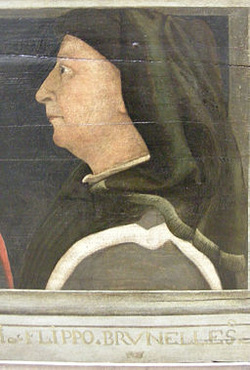 I, Sailko (2009) Fillippo Brunelleschi [Photograph] Retrieved from http://commons.wikimedia.org/wiki/File:Cinque_maestri_del_rinascimento_fiorentino,_XVI_sec,_Filippo_Brunelleschi.JPG. Available by CC-BY-SA-3.0 (http://creativecommons.org/licenses/by-sa/3.0/) or CC BY 2.5 (http://creativecommons.org/licenses/by/2.5)], via Wikimedia Commons.
In 14th century AD a handful of thinkers declared that, that would be the new age of art, literature, and culture, the 'rebirth'. Interestingly enough, it is said that the time period they declared to be the 'renaissance' is not very different than the time period that preceded it. Despite that fact, there still was some change in thought. One of the biggest themes during this 'renaissance' was the idea that "man was the center of his own universe" (Italian Renaissance 2010). The renaissance was said to have began in Florence, Italy where wealthy elitist invested in the ideas of artists and intellectuals. These artists and intellectuals rediscovered classical Greek and Roman sources which began the idea of humanism. "Humanism" is what defined the Italian renaissance: secularism, physical beauty, and the achievement/expression of man. On the science and intellectual spectrum of the Renaissance, the people were challenged to question most things they knew, especially the church. Influential leaders such as Leonardo Da Vinci and Galileo Galilei created many scientific rules and principles that were contrary to what civilians knew. Galileo in particular was arrested for building a telescope that proved the Earth and planets revolved around the sun, not the opposite way, which is what the church believed. Facing torture and death, Galileo would not take back his statements, saying "I do not believe that the same God who has endowed us with senses, reason and intellect has intended us to forgo their use" (Italian Renaissance 2010). The end of the Renaissance occurred when the Council of Trent official declared the beginning of the Roman Inquisition. During the inquisition, humanistic ideas were considered hearsay and civilians would be arrested for it, thus exterminating the renaissance (Italian Renaissance 2010).  Learn more about the Renaissance here.
Architecture
Italian renaissance architecture had many features to it that were reminiscent of greek and roman architecture (Hartt, F.). Most of the buildings and sculptures created during this period were gothic in style and structure (Hartt, F.). The biggest architects during this time was Donatello, Lorenzo Ghiberti, and Fillippo Brunelleschi. The biggest renaissance architectural feats are located in Florence, Italy, the heart of the Renaissance, where design was dominated between Brunelleschi and Ghiberti. Many of the renaissance buildings created had humanist and classic roman principles within them (Italian Renaissance 2010).

Venice was purposefully made on unstable ground. Around the 5th century A.D. barbarians tormented towns that belong to the Western Roman Empire as the stronghold toppled. Many people fled the scene to avoid the violence and ended up in the marshy islands of Venice. The refugees did not intend to stay on the sporadic islands, but eventually began to find the place as home. In order to stay in the land, the Venetians drove stakes into the ground, built platforms on the stakes, then began to build their city as shown in the photo below (Oche). The wood used to build Venice was from oak and pine trees. As many people know, wood can decay after years of weathering, so why has Venice not crumbled to pieces? Well, one way wood decays is be becoming wet then drying causing warping, but since the wood in Venice is constantly under the water, it does not go through the drying process and become warped (Oche).

The Construction of Venice, the Floating City. (2014, June 13). Retrieved April 1, 2015, from http://www.ancient-origins.net/ancient-places-europe/construction-venice-floating-city-001750