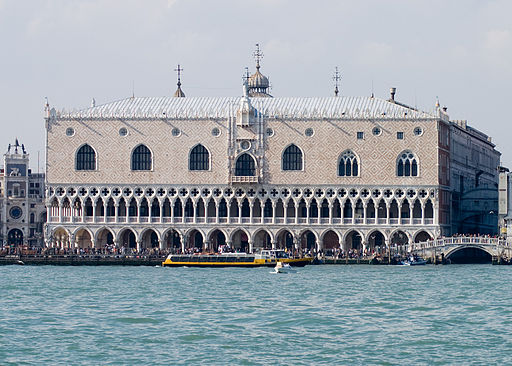 Balet, Andrew. (2007). The Doge Palace view from the Grand Canal. [Photograph]. Retrieved from http://commons.wikimedia.org/wiki/File:Photograph_of_of_the_Doges_Palace_in_Venice.jpg. Available under CC BY 3.0 via Wikimedia Commons
Architecture
Located off the Grand Canal, the Doge Palace is home to the Doge of Venice, or the chief magistrate of Venice. The Doge Palace that we see today was designed by Fillippo Calendario in the 14th century, however the Doge Palace has been around since the 10th century. In the 10th Century, the palace was built on wooden stockade, and appeared to be more of a defense tower or a fort. Unfortunately that building was destroyed by fire and other  natural disasters--thus giving birth to the building that stands tall in Venice today (Doge's Palace: Palazzo Ducale).

Fillippo Calendario was executed for treason in 1355, which caused construction of the Palace to be slower than expected. The Venetian Gothic style palace was built in two phases: phase one The eastern wing (1301-1340) and phase two the western wing (1340-1450) (Doge's Palace: Palazzo Ducale). 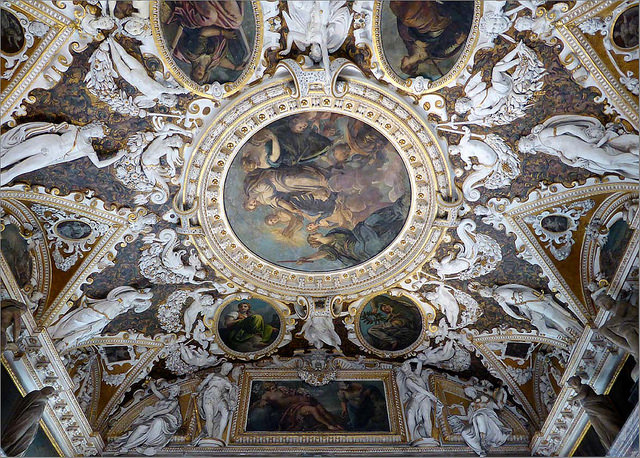 Mackness, Jenny. (2014). Ceiling of Doge's Palace. [Photograph]. Retrieved from https://www.flickr.com/photos/jennymackness/16812280202/in/photolist-r5GrdU-55ENP-nUZbYC-69Ee7A-8YNvZg-5zmseT-o6E6YJ-oSz6UZ-rkbBHu-rki53v-rzsnoh-rkaHKE-qEXJYZ-rkbBoG-rzsnab-rBDkXc-rzsnqG-rki5W4-rBDmRs-8YRNfj-K9c49-rkbAN3-rki446-qEKhAy-rkbAuN-rkaGd1-riqwze-rBDkb3-fNnTdZ-9nKtFs-6NYzVT-bpiMdJ-pCv8Hm-4By2Nv-7h89Pz-dhg3X5-dGvDuu-dGr7c2-qP2B37-qi5GeH-qzkGAM-4CZ5NP-9q6gx-cdLkHb-prNyG3-7LjUK-bKDhW-bLDnj-bLDni-epXCP8%20(CC%20BY-NC-SA%202.0). Available under CC BY-NC-SA 2.0.
A closer look at the ceiling inside the Doge's Palace (Above). The Senate Chamber in the Doge's Palace (Below). 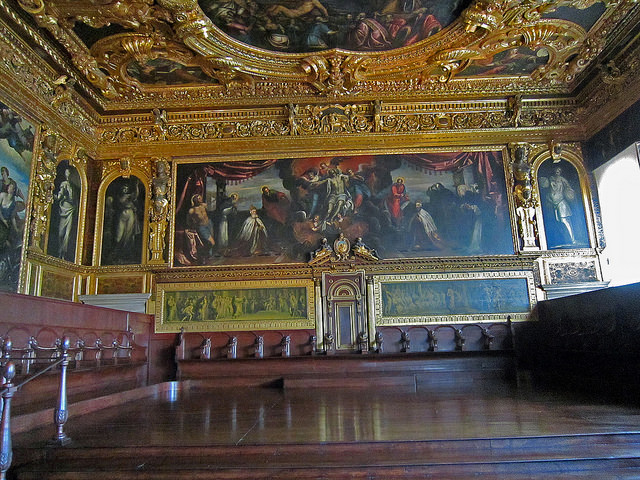 New Prisons and The Bridge of Sighs 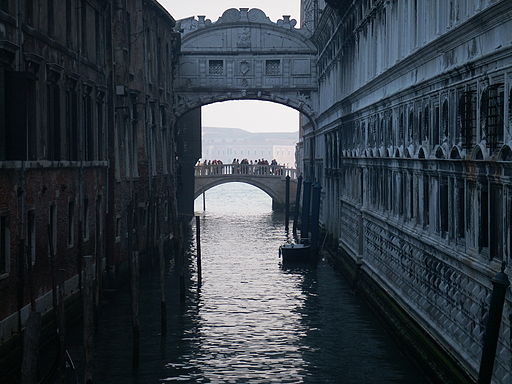 B. Welleschik. Bridge of Sighs connected to the Doge's Palace and New Prisons. [Photograph] Retrieved from http://commons.wikimedia.org/wiki/File:Seufzerbrücke1.jpg. Available under GFDL (http://www.gnu.org/copyleft/fdl.html) or CC-BY-SA-3.0 (http://creativecommons.org/licenses/by-sa/3.0/)].
The Doge's Palace was also home to the prisons for criminals in the 15th century. Eventually, the Doge and republic decided that there should be her prisons that are more health considerate for the prisoners (Layout and Collections: Prisons). This idea gave birth to the New prisons and the Bridge of Sighs. In order to have easy access to the New Prisons, the Bridge of Sighs was constructed, connecting the Doge's Palace to the New Prisons.

More information on The Bridge of Sighs and The New Prisons.

Information Tour of The Doge's Palace